Audio software on the Linux platform is very stable and advanced catering to the high end of the audio market where precision and quality have priority over shiny graphics. Many of the coolest projects have been in development for over 20 years. There are several installation and setup options for new users to choose from which smooth out the rough edges and ease you through the process of getting started so you can do what you really want to do... producing, creating and manipulating digital audio right?

You have hundreds of native plugins to choose from and VST's can be used too. With the JACK audio server you can connect multiple applications to each other on a single PC or multiple PC's over a network while also taking advantage of multiple cores, 64 bit floating point operations and direct from disk file streaming. There is support for USB devices, Firewire devices, MIDI controllers and Bluetooth headsets. The ALSA and OSS drivers provide support for hundreds of consumer grade soundcards and close to all of the premium brand multi channel professional devices too. For general desktop sound playback and control you have the very mature Pulse Audio which lets you manage every application individually as well as providing bluetooth headset support out of the box.

There are hundreds of tools and, plugins. The combinations of weird and wonderful choices you can make with Linux Audio are endless. With so much to choose from there is no excuse for not having tried it out at least once.

Before you start
A bit of Linux history
Some basic tips for using Linux
Some of the more useful Linux commands are:
Netiquette

If you are new to Linux we recommend doing a basic tutorial. If you need to know more the Linux howtos are the place to look.

A bit of Linux history

Linux is the kernel of operating systems that look like and perform as well or better than the famous operating system from AT&T Bell Labs. Linus Torvalds and a loosely knit team of volunteer hackers from across the Internet wrote (and still are writing) Linux from scratch using tools developed by the GNU project. It has all of the features of a modern, fully fledged operating system: true multitasking, threads, virtual memory, shared libraries, demand loading, shared, copy-on-write executables, proper memory management, loadable device driver modules, video frame buffering, and TCP/IP networking.

Most people, however, refer to the operating system kernel, system software, and application software, collectively, as "Linux", some even refer to it as GNU/Linux. Linux was written originally for 386/486/586-based PC's, using the hardware facilities of the 80386 processor family to implement its features. There are now many ports to other hardware platforms.

The Linux kernel is distributed under the GNU General Public License.

Some basic tips for using Linux

The Linux environment is very flexible. All programs can be accessed via a text terminal/console. Many of the programs can also be started with a mouse click. Depending on your level of expertise you may prefer point and click. The terminal is very similar to dos in the Windows operating system only much more powerful. As you become more comfortable using Linux the terminal will become your most powerful friend. From here you can do anything with the computer. Provided you have the right passwords.

There are many commands that can be typed into the terminal which can save a lot of time. To see the full list available open a terminal and press the Tab button. This will give you an option type y and a full list will appear before your eyes.

Some of the more useful commands are:

will put you into the directory called usr

ls - this prints a list in the terminal of the files and directories in the current dir.

prints a manual in the terminal for the ls command. Just press q to close it.

mkdir - this creates a directory.

creates a dir called music in the ~/newbie directory.

cp - this copies a file from one place to another on your system.

copies the file named song.mp3 into the dir called album.

ln - this creates a link from one file to another.

* flags are very useful additions to a text command. eg. ln --help or ln -h will print a help message for the link command. This will give you all the commonly used flags available for the command too.

Firstly. If you want to learn how to use Linux like a guru you need to be willing to do 2 things. One is read every bit of information you think may be relevant. The other is be prepared to invest a lot of time. At first this may seem like a big task but the more you learn the better the results. With Linux you are the one in control. You have to be prepared to get your hands dirty and in the process you will learn why so many people invest long hours of their spare time working for free to contribute to the Linux community.

Once you have done that the next thing you will probably do is join a mailing list or newsgroup. The main thing to remember is that Linux is a community. The people who contribute to Linux projects are often very busy. They contribute because they want to. Many people do so simply because they enjoy the kick from getting something to work. No one is under any obligations. If you do join a list or group allow a little time to get a feel for the people you will be communicating with. Often reading the archives will give you a good idea. Don't spam (repeat messages) Don't expect instant answers and be prepared to be the only person with a "My x won't...". However, if you are willing to put in the effort to solve your problem, then more often than not there will be someone who can help. After a while it might even be you. Before you send in questions make sure that you have read all the documentation that came with x program. If you still can't figure it out then the list or group is your next best bet.

Check out Linux Musicians Forum if you prefer browser based communication

There is also a French Language Linux Musicians Forum

And a German Linux Audio Forum too

The Linuxaudio.org wiki is a very good place to start


IRC channels on the Freenode Network

There are many educational institutes where Linux Audio Software is part of the educational softwre infrastructure .

Programs: KHM is an art school with a focus on media, and a film school that sees its origins in the artistic moving image
Enrollment: KHM admits around 330 students a year

Programs: The Casa della Musica operates as a production center from the point of view of teaching and learning, creating and dissemination projects and music courses, as well as music festivals

Programs: A broad spectrum of academic disciplines, ranging from engineering science to natural science, planning science and economics, as well as the humanities and social sciences
Enrollment: 29510 students, including 5988 students from other countries

Programs: The Center for Art and Media provides a forum for science, art, politics and finance
Enrollment: Artists in Residence and Research Center


As well as the official community run wiki at Linuxaudio.org with excellent written and video tutorials which is regularly maintained and updated there is also a tonne of legacy doumentation to get through. If you are seriously interested in progressing to "Guru" status you need to know the foundations.

Unless otherwise specified the text and format of the documents here are released under the GNU Free Documentation License.

The quicktoots are a community initiative documenting ways we have found to use various Linux Audio Applications.

The following documents and howtos are provided for convenience. They are specific to sound drivers, recording, MIDI and music production techniques for a GNU/Linux environment. If you read and understand all of these you will find your overall understanding of Linux Audio is greatly advanced.


There are many audio focused Linux distributions that are aimed at providing a seemless audio and mulitmedia experience. You can choose from a long list of current and legacy distros. Some of them are just repositories for your favorite Linux. There are also live/bootable CD/DVD's and complete solutions with professional and proprietry software included.

The people who work on these distros put in a lot of effort to provide the most complete and user friendly experience possible using Linux as the foundation for the platform. Give them your money and you will be enriched by the experience.

The Repositories below are the most popular but don't let that stop you from trying all the options.

Find a selection of plugins for the Linux Platform Here

Music Made with Linux

There is a growing collection of high quality Libre Sample libraries

Make sure to subscribe to the Linux Multimedia Google News Feed 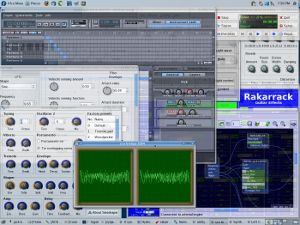